The violence and massive strikes of Palestinian workers that took place during the two Intifadas1 paralyzed the Israeli economy, heavily dependent on Palestinian labor, following the closure of the borders between Israel and the West Bank by the occupying army.. Employers in sectors such as construction, agriculture and caregiving – despised and known for their gluttony for cheap and exploitable labor – therefore put pressure on the Israeli government to obtain authorization to import non-Jewish hands… and won. Along with the introduction of incentive policies for employment in these sectors towards Israelis, in the agricultural sector since 1995, thousands of Thai workers started to be literally imported by Israel. All of them come from peasant families from the north of the country and left Thailand because the traditional rice cultivation cannot compete with corporate industrial rice culture…

How does this work?

Every year, the Israeli Ministry of the Interior issues a certain number of work permits for each sector and each nationality. The number of permits is renegotiated annually between ministries and employers’ unions of each sector. Permits are granted to employers, not to the workers. Employers, being unable to find candidates for immigration by themselves, delegate this task to manpower agencies. This market generates millions of dollars since a migrant who wishes to find a position in Israel must pay on average $3000 even before he starts working. Since most of them obviously cannot afford this price, recruitment agencies generously grant them loans at interest rates that increase by 3 to 5% per month and that they must reimburse within two years. Furthermore, although these agencies are required by law to open bank accounts for the workers in Israel, they often pay wages into Thai accounts, drawing all kinds of additional fees on the process. The workers do not have access to the accounts in question, and since they do not receive pay slips, they are often unaware of how much they are actually paid and how much they still have to reimburse.

In addition, thousands of migrants who have gone through all these steps successfully arrive in Israel to realize the promised job does not exist. They are not only indebted and unable to return home, but also automatically become illegal immigrants. Moreover, a work visa may not exceed five years and migrants are required to leave the country within 30 days after the end of their contract (which is rarely possible for practical reasons), otherwise they end up undocumented. These undocumented migrants are likely to be arrested, detained indefinitely and deported at any time. Israeli policies also officially organize police raids to hunt them down, or post Wanted notices straight out of Western movies. Indignant NGOs urged the government to reduce the use of violence and you can now find official letters encouraging migrants to turn themselves into police, in exchange for an immediate eviction without violence and at the worker’s expense. Reporting migrants to the police is an integral part of this system, since the Ministry of the Interior refuses to issue new work permits to employers for the import of new migrants if they do not prove that “their” previous migrants left the country. They have a vested interest in the expulsion of a maximum number of migrants to keep running their business this way.

On the other hand, the aim of these policies is to prevent the permanent settlement of migrants in Israel to avoid aggravating the plight of the “Israeli Nation.” Indeed, “48 Palestinians²”—citizens of Israel, Muslims, Christians and Druze will soon be the majority in a state created exclusively to be the Homeland of Jews, by and for Jews. Therefore, it is not an option for the Israeli decision-makers to let migrants from all over the world aggravate the situation of identity and politics, already quite complex.

In Israel, the agricultural sector is known to be the most opaque and inhuman because it is intrinsically the least publicized of all, to the extent that the migrant workers live isolated from towns, and for those in the settlements, from the State itself. They work in slave-like conditions in spite of their work contracts. The legal minimum monthly wage of a Thai farm worker is about $ 1300 in Israel, $ 1080 in settlements in the occupied territories and $ 5.60 for each additional hour. This is about 30% less than the legal minimum wage paid to an Israeli and two times more than the legal minimum wage of a Palestinian. However, for migrants and Palestinians, legality is not a reality, a fortiori in the settlements, which tacitly have complete freedom of organization, and live beyond the control of any kind of administration. In fact, Thai migrants work 8 to 18 hours a day, with one day off per week in slack season, and their overtime is partially paid or unpaid. They manipulate all kinds of chemicals without protection, even rudimentary protection, and are crammed into shanty-like “housing” in caravans located in the middle of greenhouses, or in storage sheds. Furthermore, women, already a minority among their male colleagues, can be used by settlers as maids or “masseuses”…

Call for your rights

The whole system is organized so as to discourage migrants from calling for their rights. Most of the time, employers withhold their passports and keep them isolated from the Civil Administration3. Besides that, it’s rare to find migrants who speak Hebrew or English and who even know their rights. In addition, they take the risk of becoming undocumented. Indeed, if they are fired or resign, they automatically become illegal. Even if they have, in theory, the possibility of turning to recruitment agencies to find another employer who holds an agricultural permit not already given to a Thai, agencies prefer to import new workers and earn new commissions. As for women, they automatically become illegal if they get pregnant, with all the problems this situation implies in terms of access to medical care and administrative status of their children….

Today, there are 24,600 Thai workers working in the agricultural sector in Israel and the settlements in the occupied West Bank (all illegal under international law). The lack of organization and unionization of these workers caused an Israeli NGO, Kav LaOved4, to emerge, defending their rights, calling deeply into question – consciously or not – the segregationist policies of its government. It receives complaints from migrants and assists them in the maze of legal and administrative procedures, also providing temporary shelter in emergency situations. Their lobbying towards the Israeli government, as well as numerous complaints from OECD5 states – pursuing their flourishing, immoral and illegal trade with Israel – have pushed the government to act. 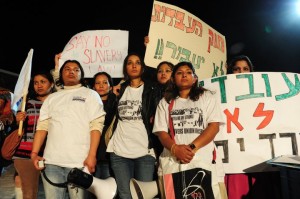 Between 2009 and 2012, the Israeli High Court of Justice sanctioned hundreds of recruitment agencies, doubled the notice for workers to leave the country at the end of their contract, and the government committed to oversee the commissions system. In addition, Israel has concluded bilateral agreements with the Thai government under the auspices of the International Organization for Migration6 and the first Thai migrants hired without the intermediate of recruitment agencies arrived in late 2012.

But can we really call that a “success”?

The principle of importing a foreign and temporary labor force in undignified working and living conditions – in other words, the institutionalization of modern slavery and human trafficking – is not really called into question by anyone within the Israeli society. Despite the emergence of social movements calling for an end of drastic budget cuts in social services, in Israel the question of non-Jewish people remains sidelined. In addition, the economic crisis and the rightward shift  Israeli opinion directs the xenophobic discourse of the extreme right (especially of the settlers’ political party) against these people, hitherto spared – plain hatred being directed exclusively against Palestinians. 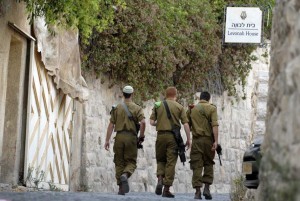 And as for the Palestinians, they are victims of the success of Israel’s policy that aimed, among other things, to economically choke Palestinians from ’48 and the occupied territories. In the West Bank, working in the settlements, so outrageous and alienating as it might be, is the only source of income for many Palestinian farmers deprived from their land and water. If they still work in the settlements (despite the fact that the Palestinian Authority considers economic cooperation with the settlements illegal), their conditions of work and life are far worse than those of migrants. Those who have been replaced by Thai workers have no choice but to leave their land which then falls into the hands of the settlers. Finally, the trafficking of human beings done by Israel and agreed to by the States of origin is not only unbearable in itself, but it also feeds the vicious circle of the colonization of Palestine. To conclude, maintaining sustainable and local farming worldwide is not only a barrier to neo-liberal slaver policies but also to the murderous colonial imperialism that has already lasted too long…

2The Palestinians of ’48: Those who stayed and accepted the second-class Israeli citizenship at the birth of the State of Israel in 1948. Lands of the current state of Israel are often referred to by countries that have not recognized this state as “’48 territories” because they are only part of the Historic Palestine.

3Civil Administration: Since 1993, the West Bank is divided into three administrative areas that determine the conditions of administration of the territory and populations. Area C, where are located the majority of settlements is under total control of the “civil administration”, which only has the name  “civil” since it’s a body of the Israeli army.

4Kav LaOved: “Migrants Hotline” in Hebrew. An Israeli NGO dedicated to migrant workers. It acts as a non-governmental human rights, trade union and often humanitarian association. It is the only organization of its kind in Israel.

– Author’s interview with a Thai worker in the Jordan Valley